Wealth-X Presents: The Top Concerns of the Ultra Wealthy

What keeps the ultra wealthy up at night?

Wealth-X conducted an Attitudes Survey in conjunction with Knight Frank to gain insights into the motivations and behaviors of the ultra wealthy around wealth management, philanthropy, wealth transfer and more. The survey was based on the views of around 400 of the world’s leading private bankers and wealth advisors who, between them, manage assets for about 45,000 ultra high net worth (UHNW) individuals with a combined wealth of over US$500 billion.

Respondents were asked to select three pressing issues regarding the UHNW population’s wealth, both for the past 10 years and next 10 years. Globally, succession and inheritance issues (cited by 56% of respondents), wealth taxes (50%) and the global economy (47%) were identified as the three main factors threatening wealth creation over the next decade. After the top three identified risks were legislation directly affecting the wealthy (36%) and stock market volatility (32%). At the bottom of the list of 12 were “Know Your Client” initiatives (4%) and anti-money laundering initiatives (4%).

When asked why their clients were so concerned about handing their wealth to the next generation, 62% of respondents said they didn’t feel their children would be encouraged to make their own wealth, while almost half said they wouldn’t know how to handle the investments.

At a regional level, personal security and safety was high on the agenda in Latin America, with 63% of respondents citing it as a concern that has grown over the past 10 years. Of all the regions, North American UHNWIs placed the most importance on personal and family health; it was the third most prevalent issue for them, selected by 47% of respondents in North America, compared to the global average of 20%.

The No. 1 issue among Asian UHNWIs for the next decade was the global economy, cited by 59% of respondents in the region versus the global average of 47%.

For Middle Eastern UHNWIs, the second largest concern after succession/inheritance was legislation directly affecting the wealthy, named by 50% of the region’s respondents, compared to the global average of 36%.

The survey reflected concerns over increased scrutiny of UHNWIs and their affairs, by both the public and authorities. Almost 70% of respondents said their clients had become more conscious about displaying their wealth in public. A significant number also said that UHNWIs were being made scapegoats for their governments’ failure to address wealth inequality issues.

2016 promises to be a very significant year for the ultra wealthy and for those who advise them, said Marc Cohen, Chief Commercial Officer at Wealth-X. “Growth is slowing and the wealthy are under increased scrutiny, yet significant opportunities remain for those who truly understand how to identify, engage and serve this group.” 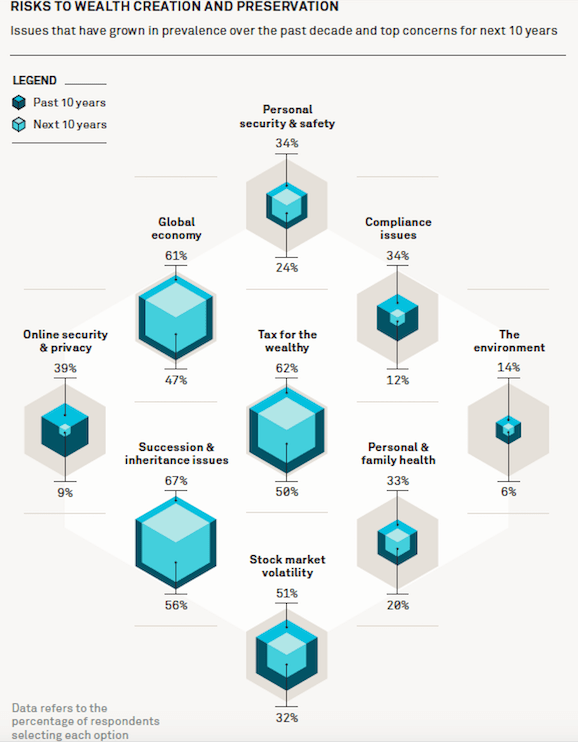